This post may contain affiliate links so I may receive compensation if you sign up for or purchase products linked to below. As an Amazon Associate, I can earn from qualifying purchases.

The Audemars Piguet Royal Oak was introduced to the world back in 1972, at the Swiss Watch show, a convention that would eventually become known as BaselWorld. The Royal Oak has since become synonymous with understated luxury. This iconic timepiece was conceived by master watch designer Gerald Genta, drafted in by Audemars Piguet to create a steel based luxury piece. Genta spoke about the Royal Oak when interviewed later, describing it as the masterpiece of his career.

The Audemars Piguet Royal Oak’s design was inspired by diving helmets of old, featuring an octagonal bezel, adorned with 8 screws, each placed at the apexes. This legendary watch has inspired other makers, and below we’ve detailed some of the best homages and alternatives to the Royal Oak available today. 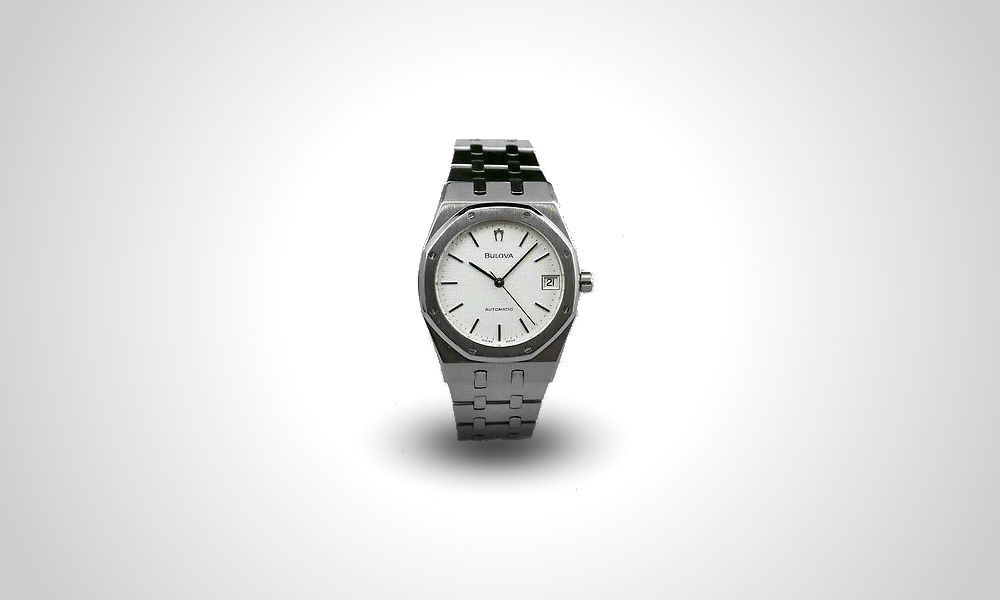 The Bulova Royal Oak is a superb AP Royal Oak homage. This watch has been much discussed, due to the fact that Gerald Genta, for a time worked as a watch designer at Bulova; however the Bulova was not released until several years after the Audemars Piguet. The Bulova Royal Oak is all but identical to the Audemars Piguet, with the most notable difference being the size, 36 mm, vs. the 39 mm AP. Bulova seems to have a reputation for producing some of the truly best homage watches, like their Omega Speedmaster homage alternative, the Bulova Lunar Pilot.

Just like the original AP Royal Oak, the Bulova features a Guilloche dial, octagonal bezel with screws at each apex, an automatic movement, and a stainless steel case and integrated bracelet. The crown is fashioned after a hexagonal nut, as on the AP, although once again, the Bulova’s is smaller than the original. Both the Bulova and the AP feature date windows at the 3 o’clock positions, as well as baton style hands. 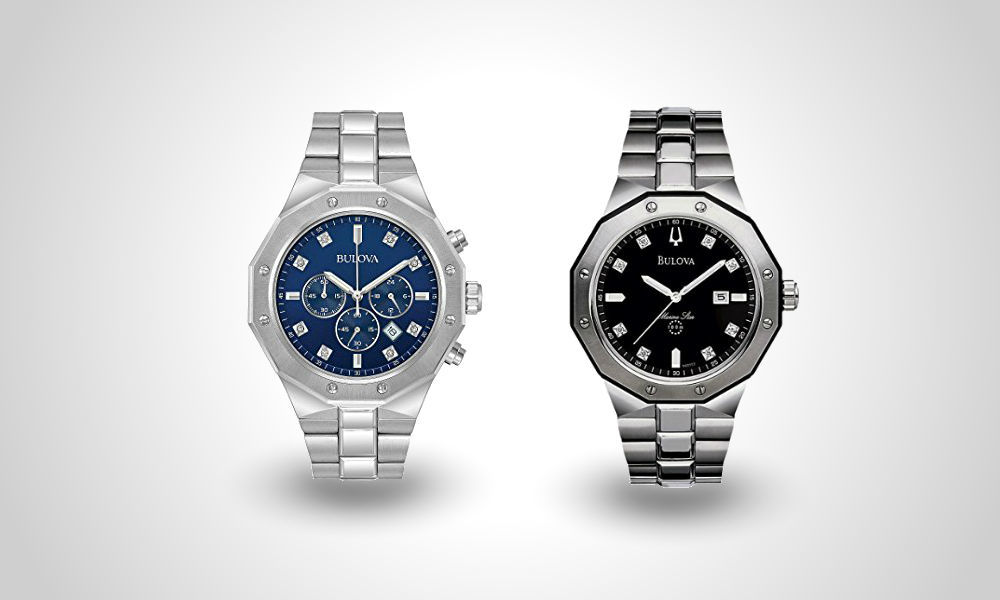 This Bulova 96D103, unlike the one featured at the beginning of the list is more of an Audemars Piguet Royal Oak alternative than a copy or homage. It features a decagonal bezel rather than an octagonal one, and its accent screws are in pairs at the 12, 3, 6 and 9 o’clock positions instead of having them placed at each apex. The Bulova is driven by a high quality Japanese quartz movement, housed inside a 44 mm stainless steel case, and it sits on an integrated stainless steel bracelet.

The Bulova is available with either blue or black dials, each featuring diamond indices. The Bulova exceeds the water resistance of the Royal Oak, with a rating of 100 meters. Both the Audemars Piguet and the Bulova feature date windows at 3 o’clock, and baton shaped hands. The Bulova can be purchased in a Chronograph version with 3 subdials, like the Audemars Piguet Royal Oak Offshore, however unlike the AP, the Bulova has a date window sitting between 3 and 4 o’clock on the chrono version. 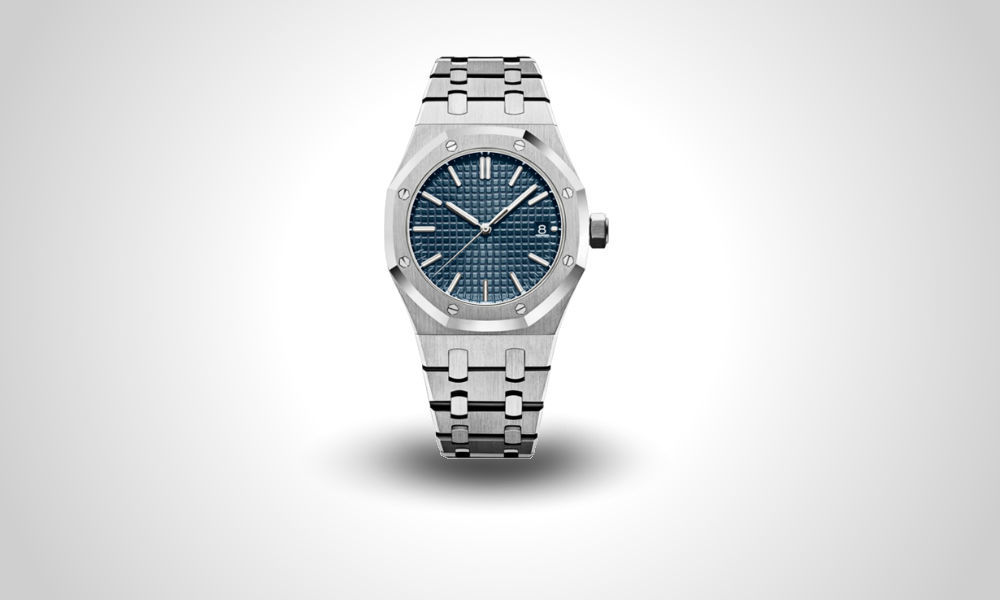 If you absolutely have to have the look of the Audemars Piguet on a shoestring budget, then the Parnis and Didun Design Royal Oak look-alike models might be of interest to you. Both of these watches are visually identical to the original, save for branding, including the bracelet design, guilloche dial, and the octagonal bezel with screws at each apex.

Both examples feature a Japanese automatic movement in a 41mm stainless case rated water resistant to 30 meters. Surprisingly, they boast sapphire crystal glass, an uncommon feature for watches at this price point. For an AP Royal Oak homage, these watches are hard to beat, especially if the original Audemars Piguet design is the main draw for you. 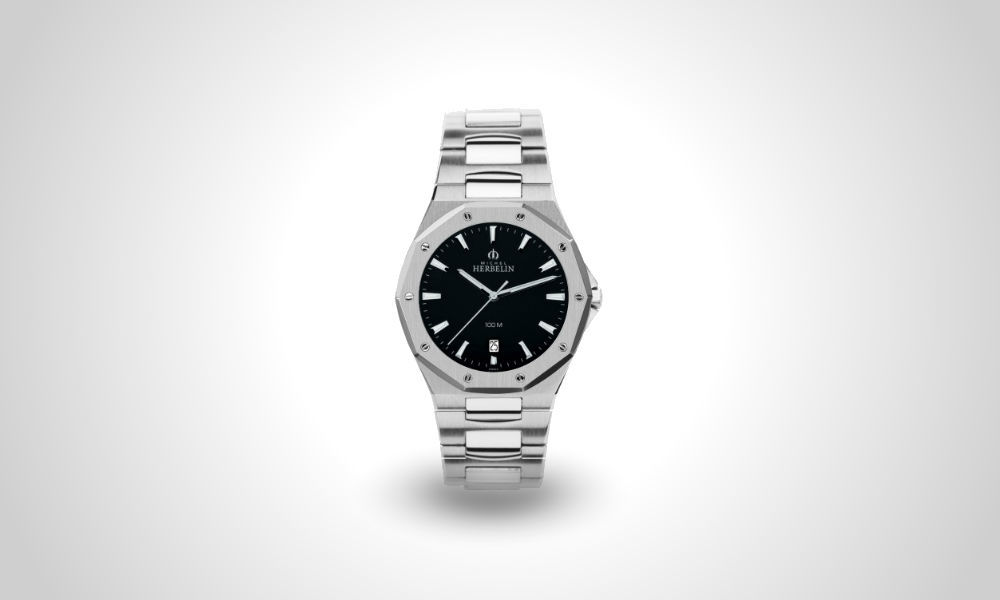 The Odyssee by Michel Herbelin is a timepiece that has clearly drawn inspiration from the Audemars Piguet classic. This AP Royal Oak alternative features a decagonal bezel, rather than octagonal, giving the Michel Herbelin a distinctive look of its own, but, like the AP, it does feature accent screws at its apexes. The Odyssee is powered by a Swiss Quartz movement, housed in a 43 mm stainless steel case and sits on a leather strap.

The Odyssee has chronograph functionality, as featured on certain editions of the Audemars Piguet. A distinct difference between the two pieces is the date; the AP Royal Oak Chrono does not feature a date window, whereas the Michel Herbelin has a double date window at the 12 o’clock position. The Odyssee boasts a water resistance of 100 meters, vs. the 50 meter rating of the AP. 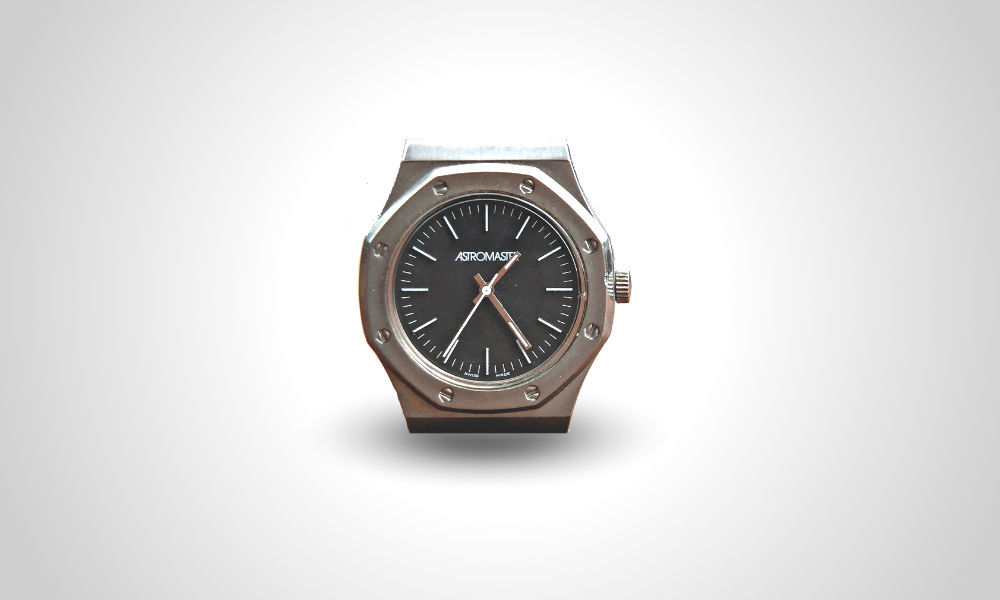 The Buler Astromaster has been out of production for some time now, but if you’re seeking a great AP Royal Oak homage, and you’re willing to put in some time to look for the right example, you’ll be rewarded with a great watch, which has taken many style cues from the iconic AP.

The Buler Astromaster is driven by a hand wound mechanical movement, housed in a 38 mm stainless steel case, and just like the AP, has a fixed octagonal bezel with a screw at each apex. The stainless steel bracelet of the Astromaster more closely resembles that of the Omega Constellation rather than the Royal Oak, although the fusion of the two makes for a handsome design. 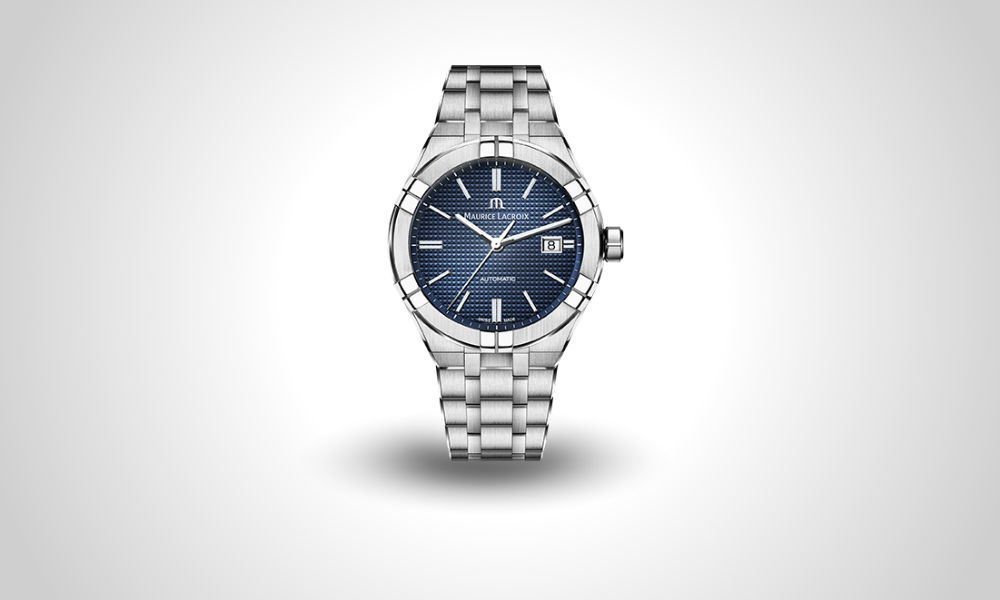 The bezel is circular, however it features six distinct accents, which gives it a similar appearance another famous watch, the Vacheron Constantin Overseas. The stainless steel case is 42mm and water resistant to 200 meters. Inside is an automatic ML115 movement with a 38 hour power reserve. 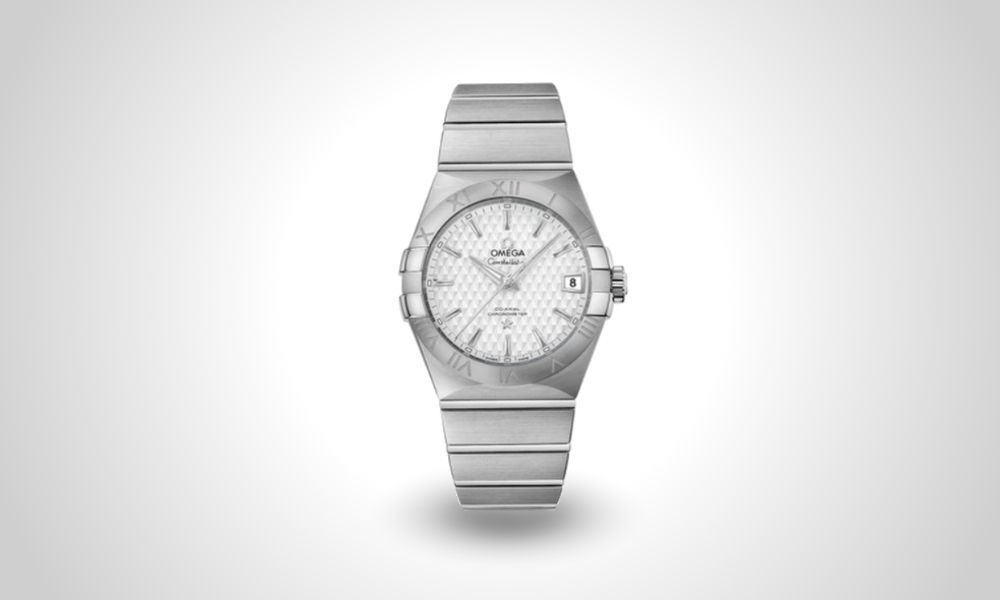 The Omega Constellation is another of Gerald Genta’s master works. Although the Constellation is available in many iterations, it is clear to see that there are several similarities between it, and the Audemars Piguet Royal Oak. Most obviously is the integrated bracelet, common to all Constellation versions. Additionally, the fixed bezel is a feature shared by the AP, although the bezel of the Omega is round, with Roman numeral markings, rather than octagonal with screws as on the Royal Oak.

The simple fact that the two are not identical makes this an ideal AP Royal Oak alternative, especially for anybody seeking a high end timepiece. The Omega is rated to 100 meters water resistance, making it somewhat more practical than the AP. 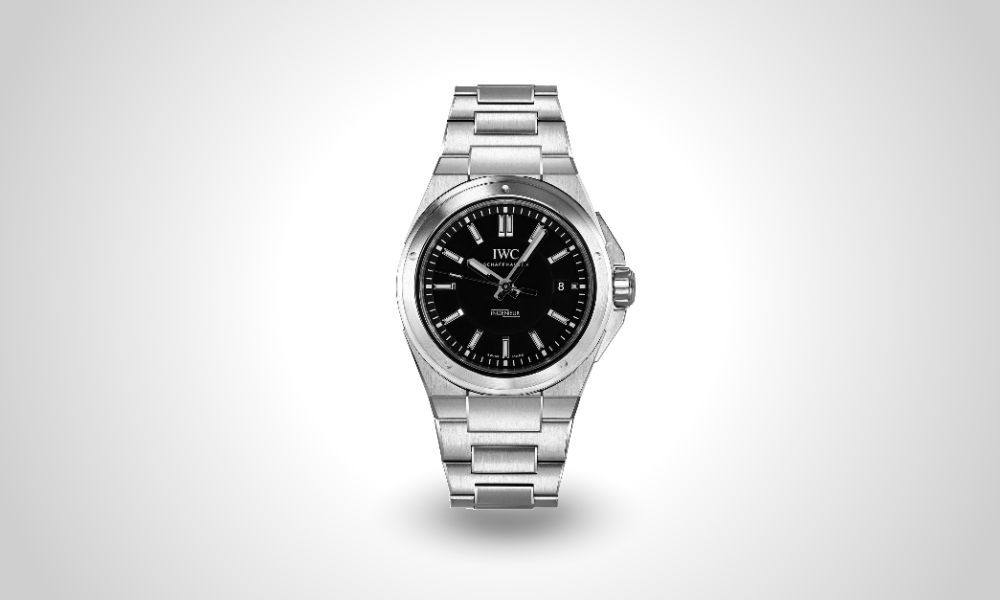 IWC are known to be one of the world’s foremost watchmakers, and their Ingenieur model makes a great AP Royal Oak alternative if budget is not a concern. The similarities between the two are no coincidence, as Gerald Genta also designed the Ingenieur. The bezel of the IWC is round, however it does feature screws placed around it, as on the Audemars Piguet. Like the Royal Oak, the Ingenieur is made entirely from brushed stainless steel. It is powered by an automatic Swiss movement, housed in a 40 mm case.

The IWC Ingenieur features a water resistance rating of 120 meters, compared to the 50 meter rating of the AP Royal Oak. The crown on the IWC boasts protection, unlike the exposed crown of the AP. The Ingenieur is presented with a black dial and color matched date window at the 3 o’clock position. 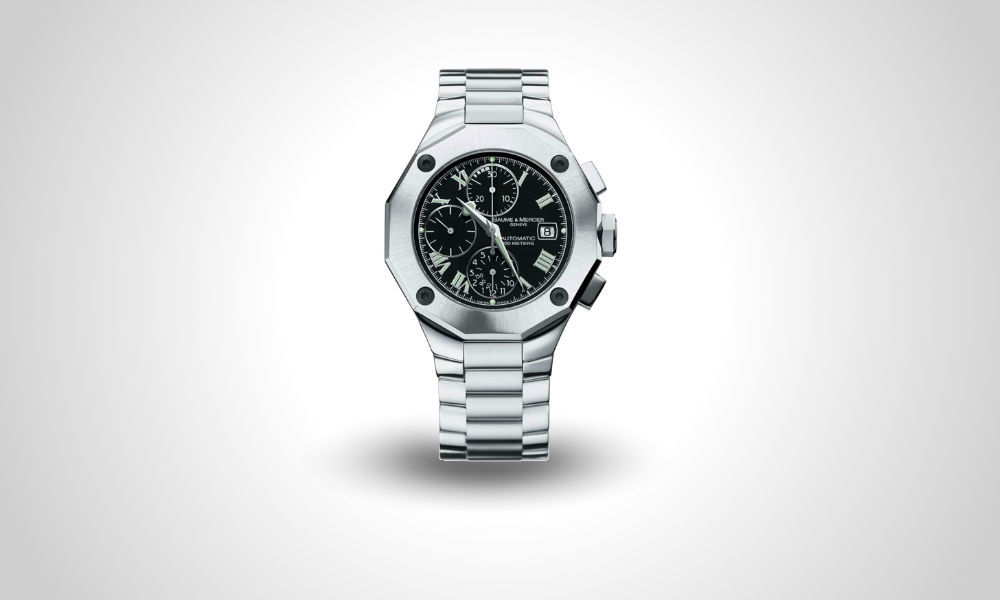 The Baume et Mercier Riviera is another luxury alternative to the AP Royal Oak. The Riviera, like the Royal Oak, is available in both standard dial, and chronograph. The Baume et Mercier has drawn inspiration from the AP in that it features a polygonal fixed bezel, specifically in the form of a dodecagon (12 sided), with some featuring 4 screws evenly placed around its circumference.
The Riviera is driven by an automatic Swiss movement, housed in a stainless steel case measuring in at 41mm. It is available on either a stainless steel bracelet, or an integrated rubber strap. The indices are marked by Roman numerals, further distinguishing it from the AP Royal Oak. The Riviera is rated to 100 meters water resistance, and features a date window at 3 o’clock on both the chrono and standard versions. 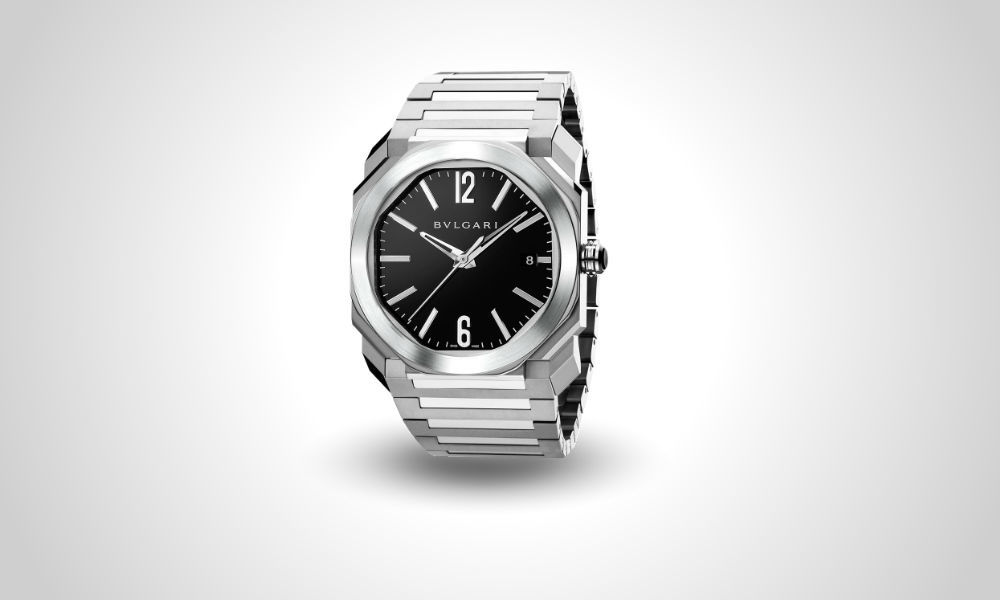 The Bulgari Octo is yet another high end timepiece with obvious inspiration from the Audemars Piguet Royal Oak. The Octo is a much more contemporary watch than its muse, especially with the stylized Arabic numerals at the 12 and 6 o’clock positions. The Octo is so named because of the octagonal dial, surrounded by a round, fixed bezel. Unlike the AP, the bezel on the Octo is devoid of embellishments, although the juxtaposition of round and polygonal design creates enough interest to make this watch stand out.

The Bulgari Octo is available with either a blue, or black dial. It sits on either a stainless bracelet, or a leather strap, colored to compliment the specific dial hue. It features a color matched date window at 3 o’clock and baton shaped indices. Both the AP and the Bulgari are rated water resistant to 50 meters. The Octo is powered by an automatic Swiss movement, housed in a 38 mm brushed stainless steel case.

Last Updated on November 11, 2021 by The Upgreater